Devotional Translations: Early Modern Replicas of the Holy House of the Virgin

Since the original structure’s supposed miraculous appearance in the eastern Italian town of Loreto in the late-thirteenth century, architectural replicas of the Holy House have appeared in communities from Sicily to Poland. This project enacts the first comprehensive study of surviving Holy House replicas across Europe. Each structure resonates with regional priorities of devotional interaction through installation, adornment and cult ritual. As a contributor to SACRIMA, I will investigate the mechanics of Holy House installations—their means of display, forms of devotional worship, and aesthetic similarities or divergences from the Loretan original—in order to trace the local history of reception and devotion to each divine structure. Ultimately, “Devotional Translations” illuminates the multivalent use of holy architecture as simultaneous sculptural installations, permeable relics, and manifestations of sacred space across the early modern era.

Through geographic breadth and iconographic mobility, the many Holy Houses across Europe address key themes of SACRIMA. The Santa Casa di Loreto crosses cultural boarders through multi-media reproduction: from print culture and pilgrimage accounts, to painted, sculpted, and three-dimensional architectural installations. Each architectural iteration melds local Marian devotion with the Loretan cult, manifesting new devotional foci across the sixteenth, seventeenth, and eighteenth centuries. For example, the Santa Casa in Brescia became associated with a local miracle-working fresco of the Madonna della Carità, which is invested into the external façade of the sacred structure. In this respect, these two visions of the Virgin unite to create an inherently Brescian interpretation of the Santa Casa. This project maps the many permutations of the Holy House across European communities, from city centers to open countryside, questioning the relic’s normative image in the face of constant evolution. 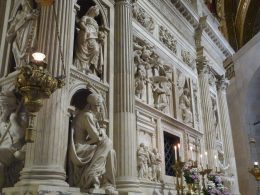 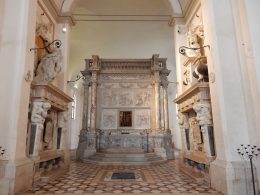 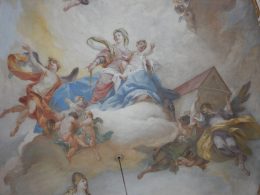