Erin Giffin will present her ongoing current research on Loretan devotion at the Sixth Feminist Art History Conference at American University. Her paper, entitled “Mater Ecclesia(e): Papal Symbolism and the Madonna of Loreto,” explores the evolution of iconographic traits of the Loretan Madonna across the early modern period.

In 1646, a sculpted image of the Madonna of Loreto processed from the Venetian church of Santa Maria della Carità to the island of San Clemente. Accompanied by nobles and members of the Patriarchal court, the grandiose procession sparked commemorative prints and paintings of the event. A frescoed image of the sculptural type still gazes out from the walls of the Venetian shrine at San Clemente, what is in fact a replica of the Holy House of the Virgin at Loreto. In the painted representation, the crowned Virgin and Child stand swathed in a white, jewel-encrusted robe. The representation itself is not unusual: The Virgin often appears dressed in majesty. But whereas the mother of Christ is typically crowned with a delicate golden circlet, or a hovering band of stars, the Madonna on the walls of San Clemente dons the triple-layered papal tiara.

The papal association with the Madonna of Loreto attests to the traditionally-held belief that the Virgin’s home was transformed into a church by the apostles, acting as the structural foundation of the faith and a site of the Apostle Peter’s tenure as first pope. According to Saint Ambrose, Mary is herself a “temple for God,” a tabernacle of Christ. In this respect, the Holy House resonates as another vessel into which the Holy Spirit entered, much like the architectural equivalent of Christ’s body, the Holy Sepulcher. A powerful symbolic conflation of Church with divine Mother, the architecture, corpus, and papal authority at Loreto unite in a resonant Catholic icon. 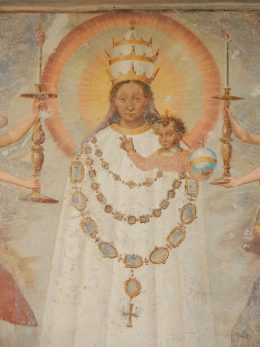 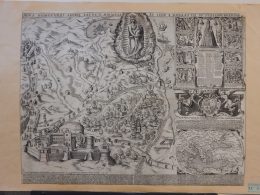 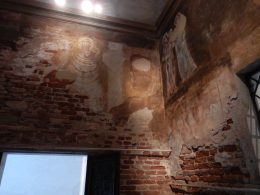